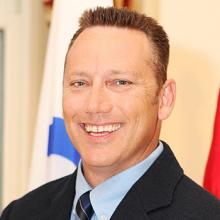 Scott
Pearce
Third Vice President
FCM third Vice-President Scott Pearce is the Mayor of the Township of Gore, first elected in November 2004. He has also been the Warden of the RCM Argenteuil since 2014—and a member of FCM’s Board of Directors since 2009.

A proud Canadian and Quebecer, Scott is strong voice for suburban and rural Canada, building links between Francophones in Quebec and the rest of Canada. He and his wife Aggy are outdoor enthusiasts, and his lifelong love of nature is also strongly reflected in his work with FCM.